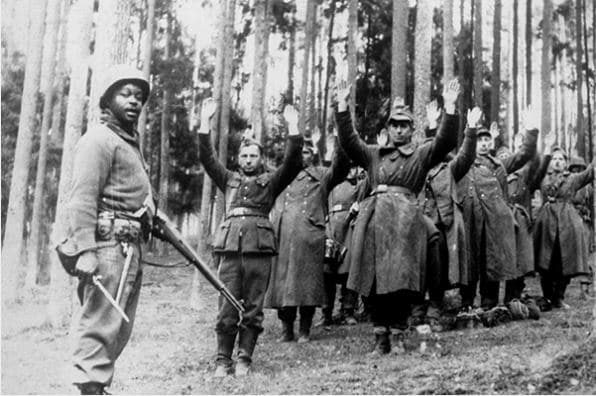 A Black soldier with the 12th Armored Division, Seventh US Army, stands guard over a group of German soldiers captured in the forest in April 1945. National Archives

Racial discrimination and lynchings in America did not discourage James Baldwin from serving his country. As part of the 784th Tank Battalion, he helped free the Dutch from German occupation. Sgt. Leon Bass and his unit proudly bore witness to the Nazi atrocities in the Buchenwald concentration camp after it was liberated, even though they were treated as second-class citizens in the segregated US Army. The “Double-V” campaign encouraged Black Americans to join the war effort by advocating victory against fascism abroad, and against racism at home. Join us during Black History Month to honor Black Americans who served.