Theodor Herzl is the “Founding Father of Modern Zionism” and at the end of the 19th Century, in the wake of rising nationalism and in the face of virulent anti-Semitism, Herzl proposed the creation of a Jewish state.

Since November 2019, the HDEC has presented the Israel Then & Now exhibition which includes as one of the featured artifacts, a Postcard signed by Theodor Herzl, 1903 on loan from The David Matlow Herzl and Zionism Collection, Toronto, Ontario. The HDEC had the pleasure of touring David Matlow and his wife through the exhibition in January.

The postcard was sent from Basel, Switzerland, in 1903 after the 6th Zionist Congress, and features an image of Theodor Herzl and Jewish National Fund stamps. 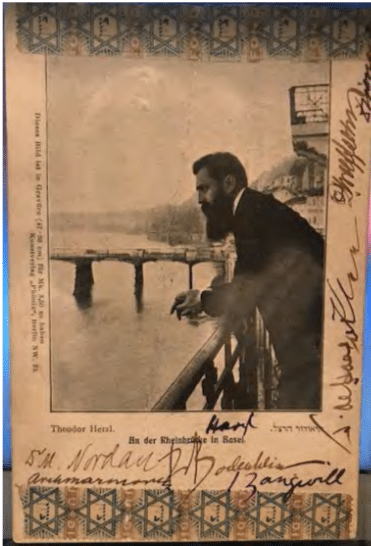 On April 14, 2020 an incredible webinar was presented by the American Zionist Movement featuring Mr. Matlow and his fabulous Theodor Herzl collection! To view the webinar please click here.