The Holocaust Documentation & Education Center is pleased to share the following program from the Holocaust Center for Humanity:

Program:  “Becoming Bielski: A Personal Story of the Bielski Partisans”

The Bielski Partisans bravely achieved the largest armed rescue of Jews by Jews during the Holocaust and have grown to tens of thousands of descendants around the world. Their story inspired the Hollywood film “Defiance” starring Daniel Craig as real-life partisan commander Tuvia Bielski. Tuvia’s granddaughter, Sharon Rennert, is a documentary filmmaker who has been exploring her family’s history for almost two decades. She will share her discoveries about her legacy which has taken her on a worldwide journey from Brooklyn to Belarus and has helped her build a rich family archive that provides uniquely personal insights into the inspirational heroes and survivors of the Bielski Partisans.

Sharon Rennert is a television editor, Independent filmmaker, swing dancer, and public speaker. She has been editing documentary and reality programs for over twenty-five years and is an active member of American Cinema Editors and the Motion Picture Editors Guild. She shares the Bielski story whenever possible to help honor the memory of her grandparents and pass this important part of Jewish history on through the generations. 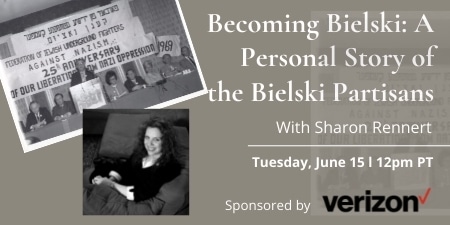