The Holocaust Documentation & Education Center is pleased to share the following program from the Holocaust Center for Humanity:

As a teenager, Siggi Wilzig used his wits to stay alive at Auschwitz, pretending to have trade skills the Nazis could exploit to run the camp. After two death marches and near starvation, he was liberated from Mauthausen and went to work for the U.S. Army hunting Nazis, a service that earned him a visa to America. On arrival, he made three vows: to never go hungry again, to support the Jewish people, and to speak out against injustice. He began his career selling neckties from the trunk of his car, and in little more than a decade rose to become CEO of both a publicly traded oil company and a bank with assets in excess of $4 billion.

Joshua M. Greene (author of Justice at Dachau: The Trials of an American Prosecutor) is a renowned Holocaust scholar and filmmaker whose biographies have sold more than a half-million copies worldwide. His documentaries on Holocaust history have aired on PBS and Discovery. He has appeared on national media outlets from NPR’s Fresh Air with Terry Gross, to FOX News, CNN, and more. 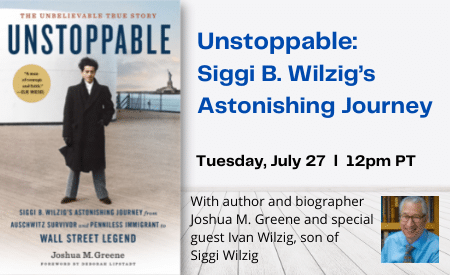