As the Holocaust Documentation & Education Center continues to feature and offer a wide variety of topics on the Holocaust, today we are adding the following to our list from Classrooms Without Borders in partnership with Rodef Shalom and the Maltz Museum of Jewish Heritage for a Lecture with Author, Anne Nelson:

Platform:  This program is free to the public and will take place online.

A story of courage in the face of evil. The tense drama of Suzanne Spaak who risked and gave her life to save hundreds of Jewish children from deportation from Nazi Paris to Auschwitz. This is one of the untold stories of the Holocaust.

Suzanne Spaak was born into the Belgian Catholic elite and married into the country’s leading political family. Her brother-in-law was the Foreign Minister and her husband Claude was a playwright and patron to the painter Renee Magritte. In Paris in the 1930s her friendship with a Polish Jewish refugee led her to her life’s purpose. When France fell and the Nazis occupied Paris, she joined the Resistance. She used her fortune and social status to enlist allies among wealthy Parisians and church groups.

Under the eyes of the Gestapo, Suzanne and women from the Jewish and Christian resistance groups “kidnapped” hundreds of Jewish children to save them from the gas chambers.

In the final year of the Occupation, Suzanne was caught in the Gestapo dragnet that was pursuing a Soviet agent she had aided. She was executed shortly before the liberation of Paris. Suzanne Spaak is honored in Israel as one of the Righteous Among Nations. 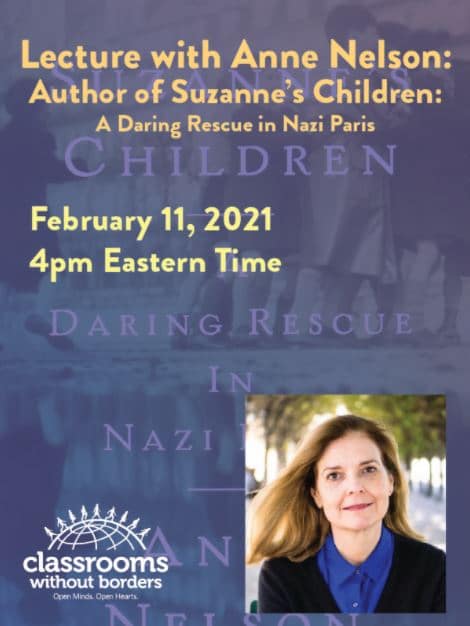