Beyond the Umschlagplatz: Remembering the Warsaw Ghetto 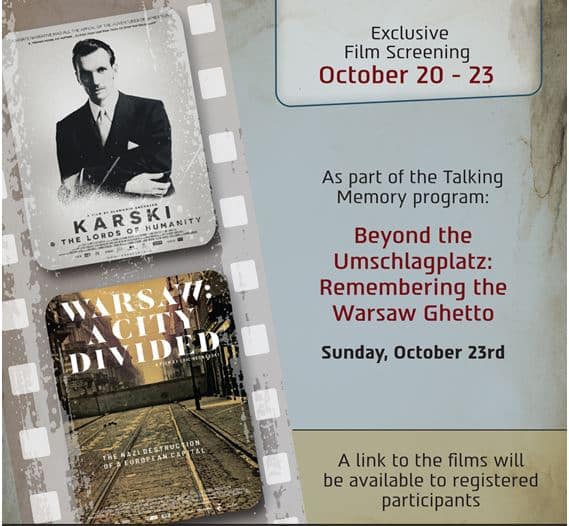 The Holocaust Documentation & Education Center, Inc. is pleased to share the Beyond the Umschlagplatz: Remembering the Warsaw Ghetto online program from The Ghetto Fighters’ House Museum on:

In the fourth and final program in the series Grossaktion Warsaw: 80 Years Later, we will examine the ways in which the Warsaw ghetto is remembered and commemorated. Prof. Liat Steir-Livny, an expert on Holocaust commemoration, will moderate a discussion with a panel of speakers who are the agents of memory today. Dr. Maria Ferenc researches the real-time information, such as rumours and false news, disseminated in the Warsaw ghetto and its surroundings and how they affect what Jews in the ghetto know about the Holocaust as it was happening. Dr. Slawomir Grunberg and Eric Bednarski have directed prize winning documentary films based on authentic documents, real-time film and testimonies of survivors in order to create a tangible commemoration of Jewish Warsaw and the Warsaw ghetto. Together, they will discuss how they are using authentic material in order to remember a community that is almost non-existent 80 years later.

As part of this event, we will be screening before the program three films that deal with the Warsaw ghetto and were directed by Grunberg (Jan Karski and the Lords of Humanity) and Bednarski (Warsaw: A City Divided).

Karski & the Lords of Humanity

Karski & the Lords of Humanity, which was directed by Slawomir Grunberg, is a feature-length partially animated documentary project. The film tells the story of a member of the Polish underground who acted as a courier during World War II and whose most prominent mission was to inform the Allied powers of Nazi crimes against the Jews of Europe in an effort to prevent the Holocaust. Jan Karski infiltrated the Warsaw Ghetto and a Transit Camp and carried his dreadful eye-witness report of the atrocities to Britain and the United States, hoping that it would shake the conscience of the powerful leaders or – as Karski would call them – the Lords of Humanity.

Directed by Eric Bednarski, this film interweaves rich material from the past with glimpses of present-day Warsaw, both its human face and its urban fabric. This documentary shines new light on a tragic time of division, destruction and mass murder, incorporating unknown amateur Polish 8mm found footage and survivor testimony. Warsaw: A City Divided affirms the importance – and the difficulty – of remembering. The film presents a unique opportunity to see the creation of the Warsaw Ghetto from both sides of the Ghetto wall, and its legacy in today’s city.