The HDEC encourages you view the following program by PBS, “VIRAL: ANTISEMITISM IN FOUR MUTATIONS.”  The film will air tonight, May 26 from 9:00 PM – 10:30 PM on your local PBS station. Please refer to your cable provider to determine the channel number for PBS.

The film will be available to stream online from PBS till June 23, 2020. You can view the film online here. 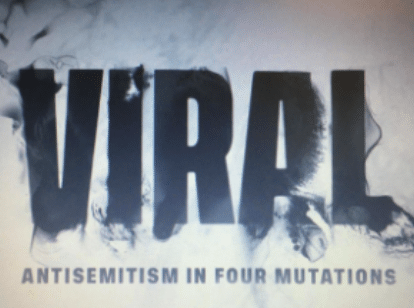 The following summary is from PBS:

Written, produced and directed by Andrew Goldberg, and produced and edited by Diana Robinson, the documentary visits four countries to speak first hand with victims, witnesses and anti-Semites. Interviewees include former US President Bill Clinton, former UK Prime Minister Tony Blair, Journalists Fareed Zakaria and George Will, and Professor Deborah Lipstadt. The film is narrated in part by Julianna Margulies.

“Viral: Antisemitism In Four Mutations” examines the mass shooting at the Tree of Life Synagogue in Pittsburgh and the rise of anti-semitism on the far right. In Hungary, it looks at how Prime Minister Viktor Orbán launched a massive campaign reminiscent of Nazi propaganda against Jewish billionaire George Soros.

In England, members of the traditionally anti-racist, far-left Labour party conflate Israel and Jews with antisemitic vitriol, causing tremendous pain for the Jewish community. And in France, the film illuminates the seemingly endless wave of violence against Jews by Islamists and radicals.

The increasing bigotry and, at times, violence within each of these four countries paints a terrifying portrait of how global hatred disseminates and harms.

More information about the program, as well as additional streaming options can be found here.