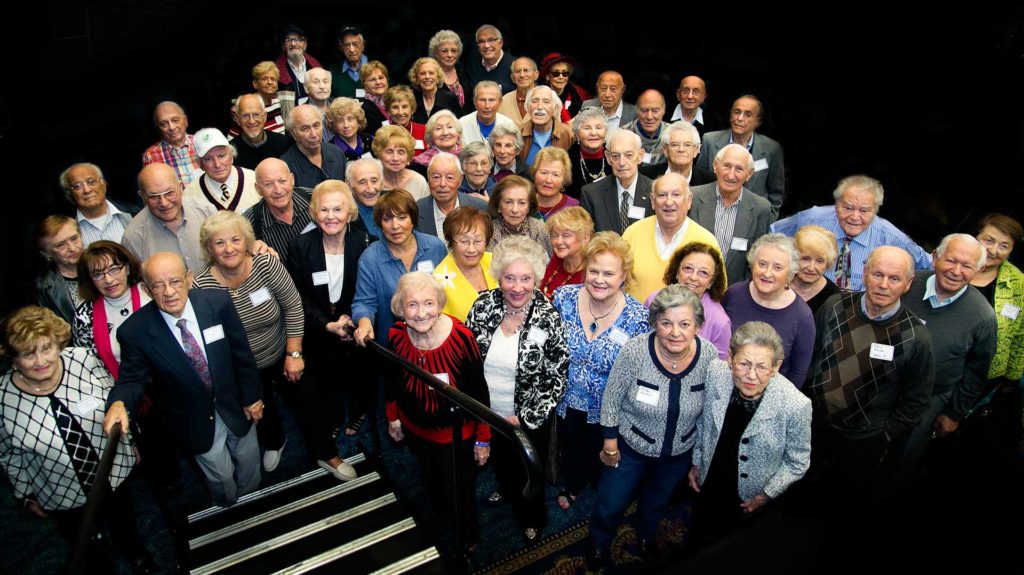 USC Shoah Foundation’s almost 30 years of experience in archiving and preserving testimony is unmatched in the field.

“Since 1980, the primary mission of the HDEC has been to document the authentic account of the Holocaust through recording the eyewitness testimonies of Survivors, their Liberators, Rescuers and others,” Father O’Neill added. “This exciting new partnership demonstrates the immeasurable significance of the HDEC Oral History Collection.”

Once preserved, the HDEC Collection will be digitized, indexed, catalogued, and made available for research and education through USC Shoah Foundation’s growing worldwide network of VHA access points at more than 170 institutions used by more than 100,000 registered educators.

HDEC will also become a VHA “full access site,” meaning that the entirety of USC Shoah Foundation’s 55,000+ testimonies, along with the 2,300+ to be integrated from the HDEC Collection, will be accessible at the HDEC location in Dania Beach, Broward County. HDEC will also be able to provide students, teachers, researchers, scholars, visitors, HDEC staff and volunteers with access to all USC Shoah Foundation’s content and associated tools.

According to Dr. Kori Street, Finci-Viterbi Interim Executive Director of USC Shoah Foundation, “The HDEC Oral History Library Collection is one of the world’s most extensive compilations dedicated to Holocaust testimony and its addition to the VHA, and deploying this collection globally within the VHA, will help amplify the collective voice that states ‘Never Again.’”

The testimonies document life before, during, and after the Holocaust, and most were conducted in English, although there are often instances where the interviewees would revert to Yiddish, Polish, Spanish, or German. An average interview runs for between 90 minutes and three hours, although some are more than six hours in duration.

Dr. Street explained that the integration of HDEC’s interviews into the VHA would help ensure that the lessons and legacy of the Holocaust are never forgotten. South Florida is one of the world’s largest communities of living Holocaust Survivors and their families. “Our partnership with the HDEC will save and share the stories of thousands of Holocaust survivors, who themselves name hundreds of relatives, friends and others in their testimonies, many of whom did not survive,” Street said. “Together we are bringing all this history to light so researchers, educators and students can use them for learning and building empathy and respect in the world.”

HDEC President and CEO Rositta E. Kenigsberg said that USC Shoah Foundation’s VHA is unique in its geographic scope and content and will provide a valuable opportunity for use by all researchers and scholars in many disciplines—educators from schools and universities, curators from museums and institutions, and filmmakers—from countries around the world.

“This incredible partnership opportunity for the HDEC was made possible by the extraordinary generosity of the Jim Moran Foundation for which all of us at the HDEC are tremendously grateful,” Kenigsberg said. “This gift, which funds the integration of the 2,300+ HDEC eyewitness testimonies, will ensure that the HDEC Collection will be preserved and available throughout the world in perpetuity.”

About the Holocaust Documentation and Education Center, Inc.

The Holocaust Documentation and Education Center, Inc. (HDEC), which has been in existence for 41 years, is a nonsectarian, non-profit organization with a two-fold mission: To document and present an enduring, historically accurate record of the Holocaust, through eyewitness accounts by Survivors, Liberators, Rescuers and others who survived terrifying experiences, overcame fear and grief, and triumphed to live meaningful and productive lives. And to teach people of all walks of life the universal lessons of the Holocaust through thought-provoking exhibitions and insightful programming, illuminating the catastrophic ramifications of prejudice, racism, antisemitism, stereotyping and bullying which, tragically, still occur today.

The HDEC is the only Museum in the world that is home to an authenticated Holocaust Railcar from Poland, which took victims from the Warsaw Ghetto to the Treblinka Death Camp; and a World War II U.S. M-4A3E8 Sherman Army Tank, on permanent loan from the U.S. Army, of the type that was involved in the Liberation of the Dachau Concentration Camp.

This first South Florida Holocaust Museum, will also be the first in North America to tell the story in English & Spanish. It is slated to be one of the first Interactive Holocaust Museums in North America that will showcase a “state of the art” Interactive Holocaust Learning Center featuring USC Shoah Foundation’s innovative Dimensions in Testimony, with Smart Tables, utilizing downloaded information from the HDEC collections.

About the University of Southern California’s USC Shoah Foundation

USC Shoah Foundation – The Institute for Visual History and Education develops empathy, understanding and respect through testimony, using its Visual History Archive of more than 55,000 video testimonies, academic programs, and partnerships across USC and 170 universities, and award-winning IWitness education program. USC Shoah Foundation’s interactive programming, research and materials are accessed in museums and universities, cited by government leaders and NGOs, and taught in classrooms around the world. Now in its third decade, USC Shoah Foundation reaches millions of people on six continents from its home at the University of Southern California