MJHNYC: Resistance in Belarus: The Bielski Partisans and Today

As the Holocaust Documentation & Education Center (HDEC) continues to feature and offer a wide variety of online programs, today we are adding the following program from The Museum of Jewish Heritage:

Program:            Resistance in Belarus: The Bielski Partisans and Today

Jewish resistance during the Holocaust took many forms: spiritual resistance in the face of persecution, shared resources in a time of great deprivation, and partisan efforts like those of the Bielski Brothers, who formed the largest partisan detachment in Nazi-occupied Europe. Aron Bell (born Aron Bielski) was the youngest of four Bielski brothers who famously started a Jewish rescue movement through partisan communities hiding in the woods of German-occupied Belorussia (now Belarus).

In this program, Aron Bell, his wife Henryka, and niece Assi Weinstein (nee Bielski) will be joined by Tamara Vershitskaya, a researcher and Curator of the Jewish Resistance Museum, for a discussion of the Bielski Partisans and their enduring legacy. The conversation will be moderated by Tablet Magazine European culture correspondent Vladislav Davidzon, who was recently awarded a fellowship at the Atlantic Council for his coverage of the 2020 Belarusian protests.

The original of this photograph, is one of the most known, evidencing the Bielski Partisans in the Belarus forest, circa 1943.

Second Generation Sara Johnson, who is the daughter of Beloved Survivors William (Velvel) and Leah Johnson wanted to include this photo showing her beloved father.

Her mother Leah Johnson, was also a Bielski Partisan and was interviewed by the Holocaust Documentation & Education Center on August 10, 2010.

The following are excerpted with permission from the Jewish Partisan Educational Foundation:

William Johnson was born on May 30, 1920 and grew up in Lubcz, Belarus. In 1941, when Germans attacked, William ended up in the Pereshunke Ghetto (Novogrudek). When the slaughter began, William was among those chosen to die. Under a hail of bullets he decided to run and escape to Lubcz, but found all the Jews in a ghetto. Eventually William joined a group of Russian Partisans. After a period of training, he was placed in a unit consisting of 300 fighters and was given a gun. Eventually William was made a commander of a group of 60 people. As antisemitism became unbearable within the Russian Partisan group, William and several others separated and found refuge in a small Jewish camp. Over time, William rejoined his old partisan group, which entered negotiations with the Bielski group. It was through this that William and Leah fell in love and were married under a chuppah amount their fellow partisans in the forest. William, through shear will and the desire to survive, risked his life many times to fight the Germans and the Russians. To learn more about William’s experience please click here.

Leah Johnson was born on September 10, 1923 in Lida, Poland. It was on the eve of her eighteenth birthday when the Nazis invaded her hometown. At the time, her family was already mourning the death of her father. The family was forced to move to the ghetto, but their passport to freedom arrived in a letter from a friend of the family, Tuvia Bielski, commander of the famed Bielski brigade. Tuvia and his brothers were hiding out in the forest and accepting all Jews into their group. In the letter, Tuvia encouraged the family to join them. Leah took on duties of the encampment, including food-finding missions and guard duty. Never safe until war’s end, Leah and her fellow partisans often found themselves fighting or fleeing the German army. The family became separated during one of these times and a group of young Jewish partisan men found them. One of these men was Velvel “Wolf” Yanson (William Johnson), a Jewish partisan from another brigade. He helped the family return to the Bielski group where he stayed behind and became known as “Wolf the Machine Gunner.” Leah and William were married and stayed with the Bielski group throughout the war until they were liberated. Please click here to view Leah’s biography and film clips made available from the Jewish Partisan Educational Foundation Collection.

Sara Johnson, their daughter wished to share the following about her mother Leah and some of her precious photos: 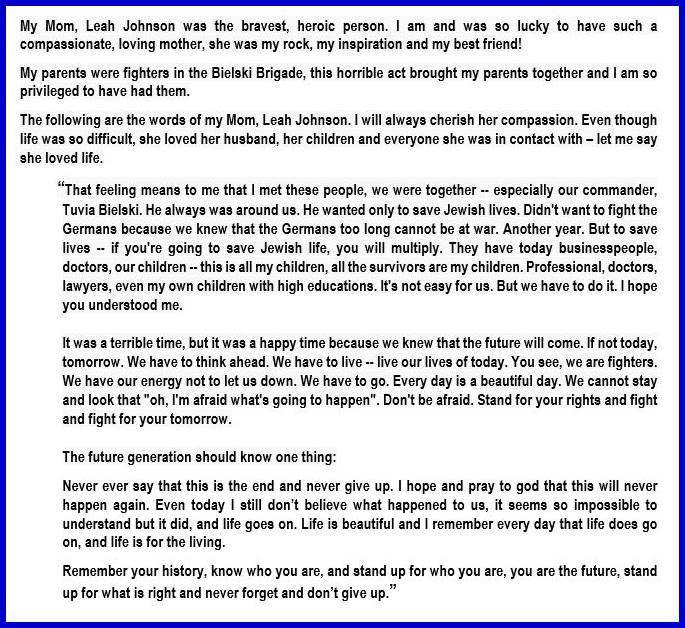 For more information about the Bielski Partisans and for corresponding curriculum and resources please click here.