The Holocaust Center for Humanity presents:

Olympic Pride, American Prejudice tells the story of 18 African Americans who defied Jim Crow and Adolf Hitler to compete in the 1936 Berlin Olympics. Deborah Riley Draper is an award-winning and critically acclaimed filmmaker, motivational speaker, and advertising agency veteran. She directed the 2016 documentary “Olympic Pride, American Prejudice” and in February 2020 released her book that expands on the stories in the film.

Set against the turbulent backdrop of a segregated United States, sixteen black men and two black women are torn between boycotting the Olympic Games in Nazi Germany or participating. If they go, they would represent a country that considered them second-class citizens and would compete amid a strong undercurrent of Aryan superiority that considered them inferior. Yet, if they stayed, would they ever have to chance to prove them wrong on a global stage? 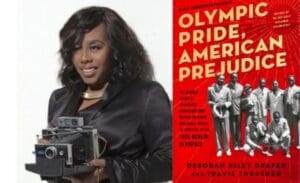 As many of you know, The Holocaust Documentation & Education Center presents an Online Film Series, and we are thrilled to share that Olympic Pride, American Prejudice was our 6th film, which is still available to stream on TUBI.

If you have not yet seen the film, we recommend viewing it before watching the webinar.

The film can be found by following this link.

You can make a donation on either our website or through PayPal.