As part of our Online Programming opportunities, the Holocaust Documentation & Education Center is pleased to share the following program from Classrooms Without Borders:

Classrooms Without Borders, in partnership with Rodef Shalom Congregation, the Ghetto Fighter’s House and the George Washington University’s Rabin Chair Forum, is excited to offer the opportunity to watch the film Complicit and engage in a post-film discussion with the filmmaker Robert Krakow in conversation with SS St. Louis Passengers, Sonja Geismar and Eva Wiener.

Complicit is a production of the SS St Louis Legacy Project and is touring as part of the 82nd anniversary of the voyage of the SS St Louis. The film contains rare footage and candid interviews with the heroic Jewish refugees from Germany who were turned away by the United States in June, 1939 and who returned to the US to make extraordinary contributions to American society. It also includes never-before-seen footage of the US Special Envoy Hannah Rosenthal’s exposé of America’s inadequate response to the Jewish refugee crisis of the time.

Complicit also features the 2012 US State Department ceremony in which Deputy Secretary of State William Burns makes the first ever apology to a delegation of surviving passengers of the SS St Louis before a group of high-ranking diplomats and foreign service officers. Part of this ceremony includes the fictional courtroom drama depicting Franklin D Roosevelt on trial for complicity in crimes against humanity. 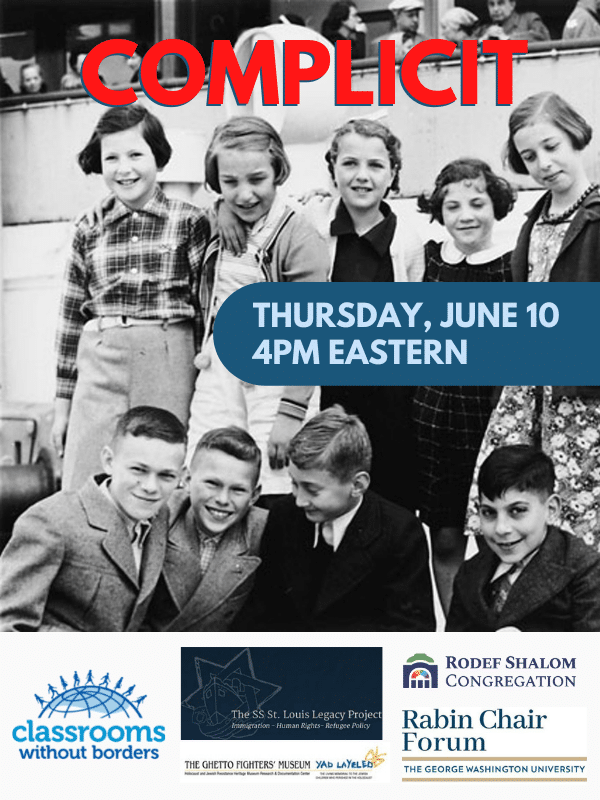